Sarah Polk Chapter was named in honor of Sarah Childress Polk, the wife of James Knox Polk, the eleventh President of the United States.

Sarah Childress was born south of Nashville near Murfreesboro, Tennessee, on September 4, 1803.  The third of four children, Sarah grew up as the eldest daughter of Elizabeth and Joel Childress, a prominent merchant, planter, tavern keeper and land speculator.  Their plantation was a mere two miles from the center of Murfreesboro, which was designated as the state’s capital from 1819 to 1825.  Since the Childresses were well connected for their day, they often entertained visiting dignitaries such as Andrew Jackson and Felix Grundy, a prominent Tennessee attorney and politician.  So Sarah was exposed at an early age to politics and political discussions balanced with the proper way for a Southern Lady to entertain such notable individuals.

With parents who encouraged such unique experiences for a young woman, it is no surprise that they would also insist on the finest education for their daughters, which was quite rare for that era.  They began their studies at a local school, and then their parents enlisted Samuel P. Black, the principal of the Bradley [Boys] Academy, to privately tutor Sarah and her sister Susan after the boys had departed for the day.  One of those “boys” would turn out to be James Knox Polk, her future husband.  Finally, Sarah finished her education at the Moravian Female Academy (now Salem College) in Winston-Salem, North Carolina. It was considered to be one of the finest finishing schools for women in the Southeast at the time.

Upon Sarah’s early return from school due to her father’s untimely death, she found her hometown booming with the activities that Tennessee’s legislators brought with them in tending to the business of the state.  Meanwhile, James had graduated from the University of North Carolina at Chapel Hill in 1818 and had returned home to study law with Felix Grundy.  Working with Mr. Grundy led to his being appointed Clerk of the State Senate and his admittance to the Tennessee Bar.  Now James was also able to renew his acquaintance with Sarah.  According to legend, Andrew Jackson urged him to court Sarah for he thought she was “wealthy, pretty, ambitious and intelligent.”  In 1823, Sarah encouraged James to run for the state legislature, and shortly after his election, they were married on January 1, 1824, in her home in Murfreesboro.  He was 28, and she was 20.  Afterwards they moved to Columbia, TN, home to the Polk family, where they were based for the next 19 years of James’ political career.  His service to the state would include 14 years in the U.S. House of Representatives where he was eventually elected Speaker and one term as Governor of Tennessee from 1839 – 1841 (they had 2 year terms then).

It was during this time that Sarah began her role as personal secretary and political advisor to her husband.  Throughout his career, she was behind the scenes orchestrating his campaigns with his other trusted advisors and sending him documents and newspaper articles earmarked as pertinent to his political record and/or his elections. This was highly unusual for a woman to fill this role, for in the early 1800s, women still had few, if any, rights (Susan B. Anthony would not officially begin her suffrage fight until 1850.)  However, Sarah seemed to know how to walk the fine line between being a Southern lady and a political expert for she was seen as one of James’ key assets among political circles.  Men as diverse as Henry Clay, Andrew Jackson, and the future President, Franklin Pierce, who said he would “rather discuss politics with Sarah than with James,” all testified to her pleasant yet forceful personality.  He encouraged her to take on this role in his life; for after one year without her in Washington, James insisted that she never leave his side again. He would hand her a newspaper and say, “Sarah, here is something I wish you to read”   and she would take it and give him her views. One thing to note here was the fact that Sarah was able to be with her husband because unfortunately they were childless.  While the other Congressional wives were home with their children, her time was free to spend with him.  So when the expected choice for the Democratic Presidential nominee fell through in 1844, it was the anticipated suitability of Sarah Polk for First Lady that swung the delegates James’ way for the nomination.

In contrast with her predecessor, the youthful First Lady Julia Tyler, who had been criticized for being too involved with worldly interests, the proper Sarah Polk proved to be very popular simply for holding fast to her Presbyterian upbringing.  She banned dancing and hard liquor in the White House, yet her social occasions were seen as genteel and elegant as wine was still served at state dinners.  Much like Eleanor Roosevelt, Sarah did not consume herself with the running of the White House, but instead concentrated on the politics of the day.  She won favor on Capitol Hill by befriending everyone, whether they were their friend or foe.  By discussing all issues under the cover of “Mr. Polk certainly says so,” she was able to avoid criticism by the women of the social echelon.  As Historian Phillip S. Klein simply put it, the American people, the press, and her peers loved her due to her “political intelligence and her social grace.”

As First Lady, Sarah Polk is credited with the following notable accomplishments:

James insisted on only serving one term from the day of his election.  So after a very full four years, the couple began their very long and exhausting journey home to Tennessee.  At every stop along the way, they were so overwhelmed by the outpouring of crowds, receptions, balls, and dinners that they barely got any rest.  This led to his contracting cholera during the trip, and within three months of his leaving office, James K. Polk was dead.  He died in Nashville at their new home, “Polk Place,” on June 15, 1849.  In a final tribute to his wife in his will, James said that she “constantly identified with me in all her sympathies and affections, through all the vicissitudes of both my private and public life.”  Sarah Polk was now a widow at age 46.

The Pilgrimage to Polk Place

For the next 42 years, she turned Polk Place into a place of pilgrimage.  Their home, which they had purchased from long-time friend Felix Grundy, became a sort of museum to him where she displayed his journals and papers and kept his study exactly as he left it.  Dignitaries including Supreme Court justices, President and Mrs. Hayes and President and Mrs. Cleveland were frequently seen visiting this cherished former First Lady.  The Tennessee State Legislature began every year by making an official visit to her house each New Year’s Day.  While she sympathized with the South during the Civil War but felt sure that James would have sought to preserve the Union, she officially designated Polk Place as neutral ground.  As a result, generals from both Confederate and Union armies, including General William Tecumseh Sherman himself, paid their respects to her while moving through Nashville.  In the final years of her life, the Daughters of the American Revolution elected her an Honorary Vice-President General; she accepted the honor saying that she was “extremely grateful to be associated with such an order,” as would be expected.  Sarah Childress Polk died on August 14, 1891, after a brief illness. She is buried next to her beloved husband James on the grounds of the Tennessee State Capitol. 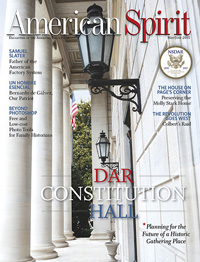 Visit our national and state websites and social media sites for more information on DAR activities. 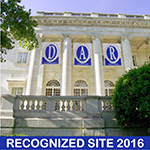