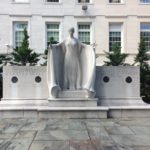 We encourage you to join our amazing network of 180,000 members who represent 3,000 chapters across the United States and internationally!

• You must be a woman 18 years or older and have an ancestor who aided the cause for American independence between the time of the Battle of Lexington, April 19, 1775, and the withdrawal of British troops from New York on November 26, 1783.

• There are many ways your ancestors could be on record as patriots, including:

Patriotic Service: Signer of Oath of Fidelity and support and Oath of Allegiance; Members of Committees of Correspondence, inspection or safety; Committees to care for soldiers’ families; Members of the Continental Congress, state conventions or assemblies; Signers of petitions to recognize the authority of the provisional and new state governments; Ministers who gave patriotic sermons and encouraged patriotic activity; Ancestors who provided material aid of supplies, munitions makers, gunsmiths, and monies, with or without remuneration, to the Colonies; Defenders of Forts and Frontiers; Doctors, nurses, and others providing medical care to the wounded; Service performed by French nationals within the colonies or in Europe in support of the American cause; Service in the Spanish Troops under Galvez; Prisoners of war or refugees; Members of the Boston Tea Party.

Signers of the Declaration of Independence

The content contained herein does not necessarily represent the position of the NSDAR. Hyperlinks to other sites are not the responsibility of the NSDAR, the state organizations, or individual DAR chapters.

For questions or comments about this site, please contact the webmaster.